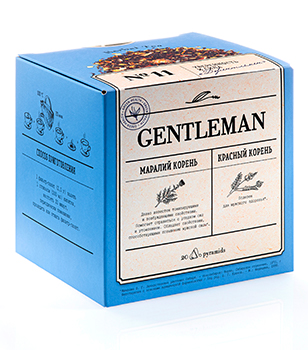 Gentleman tea drink strengthens men’s health, having anti-inflammatory and antibacterial effects. Active plant substances of this herbal tea have been used for ages in folk medicine. As well as today, their qualities are proven by the most up-to-date scientific researches. Pyramid bags give the tea leaves room to breathe so you can get even more out of the great taste and benefits.

It is very common that men don’t like visiting doctors. Preventive measures are more effective than the treatment itself, and Gentleman herbal tea is a great solution, it makes a health-supporting process easy and pleasant.

Gentleman herbal tea contains plant substances proven by ages of use in folk medicine, as well as by the most up-to-date scientific researches. Chaga mushroom, marsh cinquefoil, maral root, red root are used as preventive and therapeutic agents to treat adenoma. The combination of those herbs affects the urinary system and the digestion process while having an anti-inflammatory and antibacterial effect.

Fireweed – is used to treat headaches, insomnia, eye diseases, skin and mucous membrane diseases, tonsillitis, otitis, peptic ulcer disease, septic wounds, and anemia. Used to stimulate bleeding and to improve protective functions of the body. Fireweed is popular in folk medicine, it is used for gastrointestinal tract treatment, as a calming, antibacterial, and hemostatic agent.

Chaga mushroom – is used as a generally supportive and tonifying agent. Reduces intoxication, good for peptic ulcer disease, duodenal ulcer, and other gastrointestinal diseases. In folk medicine is used as an antitumoral agent.

Pine buds – is used in case of a cold or flu, as a calming agent, as a preventive measure for hypovitaminosis, respiratory infections, and lungs inflammations. Can be used for spine diseases, arthritis, neurosis, for nervous and cardiovascular disorders.

Use as a tea drink.

Can be consumed with sugar, lemon, or honey.

In case of urolithiasis consult your doctor before consumption.